AirDog - How It Works

All Diesel Engines Need a ‘State of the Art’ Fuel Filtration Delivery System!

The solution for diesel performance is the AirDog ® Fuel Preporator ®. It is the only filtration delivery system that separates air from the fuel, as well as water and particulates. This fuel system maintains the proper pressure flow to the transfer pump, eliminating cavitation and vapor. The Fuel Preporator significantly improves diesel engine performance and is one of a very few aftermarket performance modifications to be CARB certified and approved for sale and use in California. 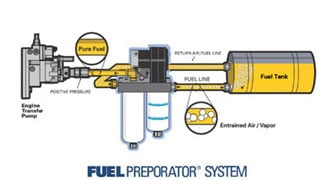 Certified To Improve the Diesel Engine

The Fuel Preporator’s effectiveness has been proven over millions of truck miles and verified by EPA & CARB Certified Olsen Ecological Laboratory testing under ISO 8178 8 Mode Test criterion. Discover how the patented Fuel Preporator technology can deliver for you:


Engineers Have Long Known About Entrained Air In Diesel Fuel

“Like water, fuel contains a certain amount of dissolved air depending upon the fuel temperature, pressure on the fuel, specific gravity and the amount of aeration to which the fuel has been subjected.”

“Normally No. 2 Diesel Fuel contains about 10% air in solution, although the air is not visible.”

“Fact ##1; There is Air entrained in diesel fuel.”

“Damage can be caused by anything in your fuel system that should not be there, including particles, heat, water and air bubbles. Air becomes entrained in diesel fuel through agitation from pumping and sloshing in the tank. Additionally, the engine’s transfer pump, operating under a vacuum, as with the conventional filter system, has a limited pressure flow available. This limited flow, which is insufficient to fully fill the pump mechanism at higher operating RPM’s, results in pump cavitation and vapor. At higher altitudes, atmospheric pressure, the force that drives fuel from the tank, through the lines and filter, and into the transfer pump, decreases. This increases cavitation even more. Conventional fuel filter systems do nothing to relieve these conditions. In fact, as the filter becomes more restrictive to the fuel flow as it plugs with use, these conditions become much worse!”

“Diesel fuel is vaporized in a conventional filtering system and is allowed to pass on to the injector system.”


“Air is also allowed to pass on to the injector system.”


“These phenomena are undesirable because the two-phase flow from the conventional filtering system not only reduces the mass flow rate from the fuel pump but also leads to a lag in injector timing. This lag in the injection of the fuel can have a considerable negative effect on the performance of a diesel engine.”

The “BEFORE” spry pattern picture, shows graphically the effect of air/vapor in delaying the pressure buildup.

The “AFTER” picture, with processed fuel from the Fuel Preporator®, represents how each and every spray pattern could and should be!

Low Torque and Low Power Output: Low torque due to a delayed injection results from the fuel arriving in the combustion chamber too late for a full burn.

Specifically, a delay of the injection from an uncontrolled event, such as the presence of air/vapor in the fuel, allows the piston to move further into the power stroke before the injection takes place. The piston is now beyond the optimum position to fully utilize the pressure boost of the expanding gasses and for a complete burn of the fuel.

Specifically, a delay of the injection from an uncontrolled event, such as the presence of air/vapor in the fuel, allows the piston to move further into the power stroke before the injection takes place. The piston is now beyond the optimum position to fully utilize the pressure boost of the expanding gasses and for a complete burn of the fuel.

The injection of fuel is intended, by preset parameters, to take place as the piston nears the top of the compression stroke. This allows the fuel to ignite as the crank journal approaches top dead center. Now, the timely injection followed by a full length power stroke, allows the fuel to burn completely and the expanding gasses to forcefully drive the piston downward. The full burn of the fuel maximizes power output and fuel efficiency with minimal exhaust emissions.

The following torque curves bare witness to the typical points where torque rise peaks and then begins to fall off. These diesel engines are all equipped with the conventional ‘vacuum feed’ filter system. Notice the point of torque rise, the peak torque range, and the similarity of rpm where torque begins to drop. This would imply the point at which atmospheric pressure fails to provide the Net Positive Suction Head necessary to support adequate fuel flow to the transfer pump, and cavitation becomes apparent. 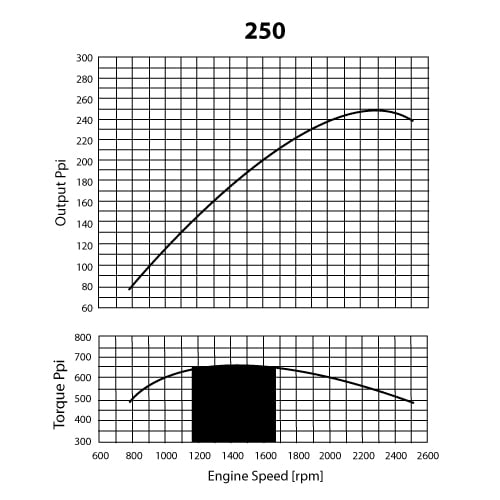 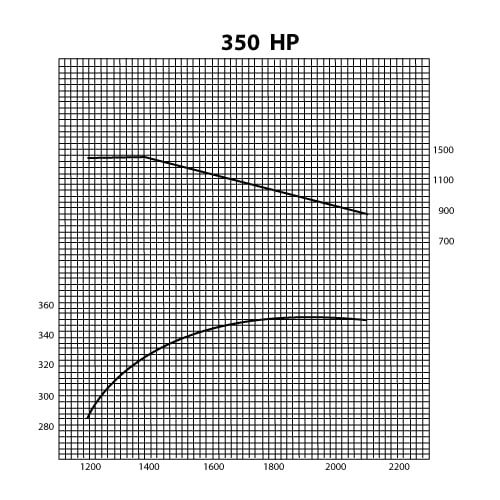 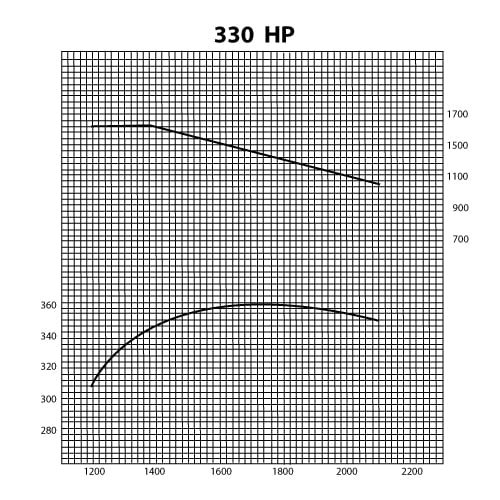 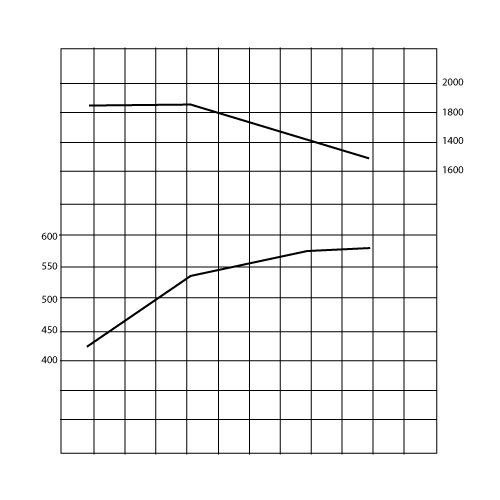 Note: It is standard within the industry to perform test cell tests with clean fuel filters to allow the engine optimum performance. However, a diesel engine in day to day operation equipped with the conventional ‘vacuum feed system’ will suffer a decrease in power output, a decrease in fuel economy, and an increase in exhaust emissions as the fuel filter plugs with use. 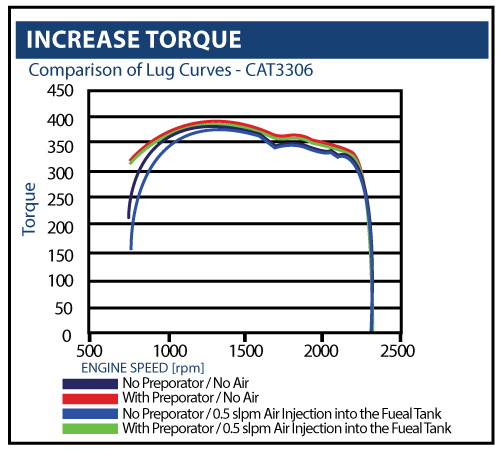 With the entrained air eliminated from the fuel and the necessary NPSH, Net Positive Suction Head, supplied to the transfer pump, the Fuel Preporator equipped diesel engine will have a consistently timely injection and perform at peak power output and efficiency regardless of fuel filter condition. Torque rise off idle is seen to double, peak torque increases about 6% and does not fall off at the higher RPM’s as it does with the conventional ‘vacuum feed system.’

Retarded injection timing causes not only low power, but also an incomplete burn. This simply means that some fuel has not burned and is going out the exhaust. An incomplete burn in itself results in poor fuel economy. More than that, low power forces the driver to drop gears increasing the number of injections over the same distance and wasting even more fuel.

Tests show that after installing the Fuel Preporator®, and all injections become timely, the carbon deposits burn out after 100 to 120 hours of run time and the NOx decreases by 46%. Other tests have documented reductions in unburned HC’s in Series 60 Detroits by 29% and 3406B Cat’s by 76%.

“The ISO 8178 is an international standard designed for a number of non-road engine applications. It is used for emission certification and/or type approval in many countries worldwide, including the U.S.A., European Union and Japan. Depending on the legislation, the cycle can be defined by reference to the ISO 8178 standard, or else by specifying a test cycle equivalent to ISO 8178 in the national legislation (as it is the case with the U.S. EPA regulations). The ISO 8178 is actually a collection of many steady-state test cycles (type C1, C2, D1, etc.) designed for different classes of engines and equipment. Each of these cycles represents a sequence of several steady-state modes with different weighting factors.” The following 6 charts and the brief summary are from the Analysis of the Olsen Ecologic ISO 8178 Test by Vineyard Technology. Both the test report and the analysis are available for study and verification. 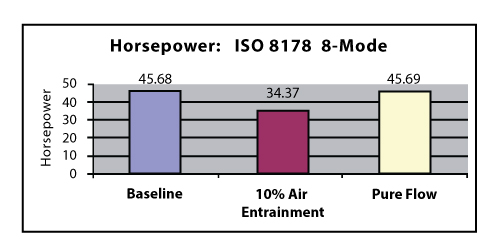 Scenario A: is the diesel baseline testing. An average of three runs, using the cycle weighted data, provided an output power of 45.68 HP.

Scenario B: air entrainment, reduced this power by 25% to 34.37 HP. By adding the PureFlow® system, the power was fully restored to 45.69 HP. Fig. 1 shows this graphically. 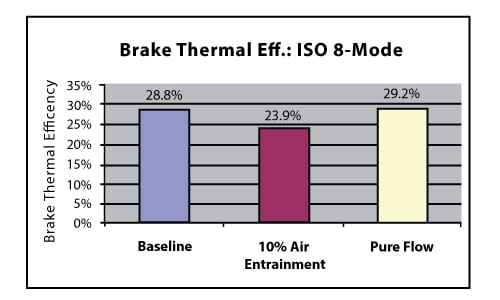 Fuel economy testing provided similar results, shown in Fig. 2. The average Brake Thermal Efficiency (BTE) was 28.8%. This means that of all the energy supplied to the engine by the fuel, 28.8% of this returned in the form of useful work, the remaining 71.2% was wasted to the atmosphere via the radiator, exhaust, and direct radiation. Air entrainment reduced this to 23.9% BTE, a reduction of 17%. Again, the PureFlow® device fully restored performance to baseline conditions, raising thermal efficiency to 29.2%. 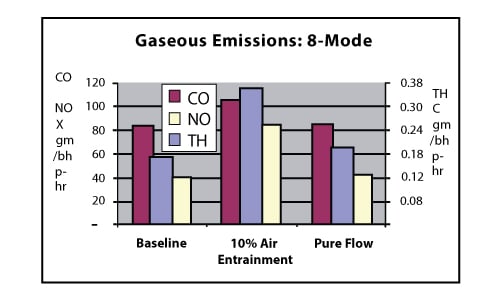 Air entrainment increased all components of gaseous emissions, including carbon monoxide (C), oxides of nitrogen (NOx), and unburned total hydrocarbons (THC). The increases ranged from 25-100% in terms of gm/bhp-hr, as seen in Fig. 3. Often, there is a tradeoff between these emission components. The fact that all three were significantly worsened indicates a serious disruption in the combustion event. Notably, the PureFlow® system restored all three components to essentially baseline conditions. 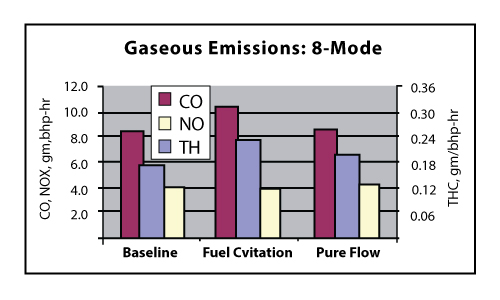 CO, NOx, and THC gaseous exhaust emissions were degraded by cavitation as seen in Fig. 6. The PureFlow® system restored these values to near baseline conditions.What about exhaust particulate matter emissions (PM)? Lack of data for the baseline and wide variability in recorded results under otherwise similar conditions precludes any definitive analysis of PM. 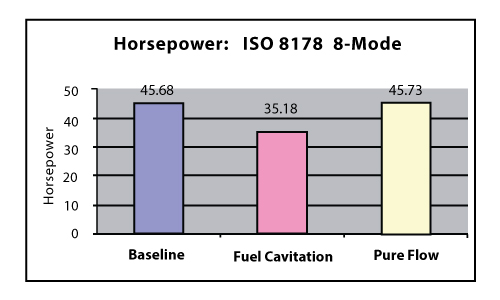 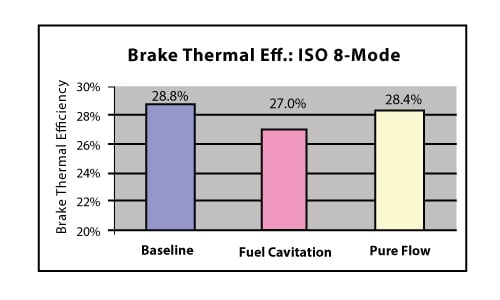 Fuel cavitation testing, simulated by a fuel line restriction, provided similar results to that of air entrainment. There was a 23% loss in power accompanied by a 6% loss in fuel efficiency, as is illustrated in Figs. 4-5. The PureFlow® system restored baseline values.

Rough idle results from inconsistent injection timing due to the variation of air/vapor present in each injection. The delayed injections also cause the idle speed of the engine to drop below the set idle rpm. Consequently, the ECM or governor must then increase the amount of fuel injected to bring the engine back to the set idle speed. This adds more fuel than the engine can completely burn. After considerable idle time, if the idle is not brought up to 800-1,000 rpm, the excessive fuel washes oil from the rings and liners, contaminates the oil in the crankcase and causes excessive engine wear. More importantly, the wet cylinder effect causes excessive unburned fuel in the exhaust of the idling diesel and has lead to anti-idling laws for truckers across the nation.

Cummins Engine Company specifically points out in their trouble shooting manual for the following complaints: first, check for air in the fuel and then, fuel inlet restriction.

All of the Above Symptoms Require:

AirDog supports a wide array of diesel applications. Visit our makes and models page to find the fuel system for your truck.

Back To Top View All Products